Okay, I just looked back and I’ve ended every post title (which makes 4 right?) with an exclamation point.  Pretty sure that’s violating some grammar or blogging rule because nothing is always that exciting, so I’m going to watch that from now on. Except for today’s post.  Because I figured that if I’m going to show you how we make eating a whole foods, plant based  (which I’m going to abbreviate WFPB from now on…my typing is NOT up to snuff and the less I have to type, the faster I can get a blog post out) diet work for our family, littles included, I should show you some of what we eat and today that is pita pizzas!  See what I did there?  Another exclamation point.  Apparently I can’t help myself around this topic.

As an aside, while I don’t envision this becoming a recipe blog, it makes sense that if you want to follow this way of eating, from time to time it might be nice to see how others make it work for them.  Recipes were the way I transitioned to being vegan and then again to being more WFPB so I definitely intend to include them.  At first, most of these are going to be inspired by (or outright poached from) other bloggers who have serious recipe development talent that I do not but fear not, all credit shall be given.  My hope is that as I continue doing this and also continue further in my Rouxbe chef training I’ll become better at coming up with my own recipes.  As of now, I don’t tend to follow recipes except as a guide, but coming up with my own from scratch stumps me.  One more place for growth, right?

But, pita pizzas! (Doh, there it is again!)  These came about because I was needing a meal for the girls and didn’t have anything planned.  I’ve made pizza dough before and like doing it; there’s something satisfying about punching the risen dough down, kneading it with all your weight pushing into the dough and stretching it out to fit your stone or pan.  However, it’s a long-ish process and it doesn’t work when it’s 5:00 and the yeast is still in the package.  So I was hunting for what to make and I saw a package of Ezekial pita bread in our refrigerator.  I knew we had sauce and most importantly, we had cashew ricotta from a recent batch of potato and kale enchiladas leftover, so the idea for pita pizzas was born.

These pictures are from my first Rouxbe assignment where we had to show our mise en place, a preparation picture and the finished product.  It was a great exercise and really has made me want to take better pictures.

As far as ingredients go, they were pretty basic.  I had the pitas, I had sauce already made but could have used any jarred sauce.  We tend to make our own or use no added salt sauces, again so we can control what we are eating.  It’s so easy to eat way more salt than is healthy so when we can control it, we do.  I had the cheese made already and then I just grabbed what we had in the frig.  Here you see tempeh, red bell peppers, olives and a greens mix from Costco.   I also added some steamed broccoli.   Pitas came out of the package, sauce was spread, I put on all the veggies and dotted the top with the cashew cheese: 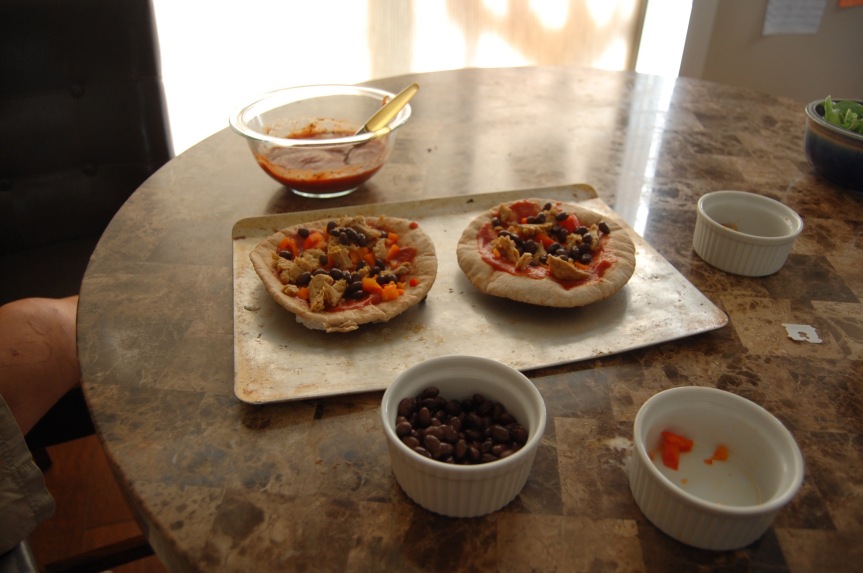 I’d pre-heated the oven to 450 degrees and popped them in.  After about 15 minutes I checked and the cashew cheese was getting a bit browned so I pulled them out.  They were piping hot and even better the pitas had crisped up and resembled a delicious thin crust.  Score!

My girls devoured them and have done so every time I make them.  It’s an easy way to get whole grains and vegetables in them because no matter what I put on them, it gets eaten.

As far as recipes go, there’s not one per se.  Ingredients are: pitas (I haven’t done this with any other pitas than Ezekiel so I don’t know if they crisp up as nicely), sauce, either homemade or jarred, vegetables and cashew cheese.  Here’s the cashew cheese recipe:

From Veganomicon by Isa Chandra Moskowitz and Terry Hope Romero. This is from memory as my book is loaned out at the moment but if it’s not exactly their recipe, it’s what I always make so I know it tastes awesome.

combine lemon juice, garlic and cashews in a food processor until a thick paste forms.  Add crumbled tofu and process till smooth. Pulse in basil and salt.  This functions like a ricotta cheese and is rich and delicious!

One time, I was without cashew cheese and `made a cheesy drizzle for the pizza out of hummus, milk and nutritional yeast, aka nooch.  I mixed them together until it was thickly pourable and drizzled it over the pizza…worked like a charm.  Girls still scarfed it up?  Down?  Anyway, all the pizzas were eaten and they asked for seconds.

Glimpse number one of some of the food we eat, done!